You Won't Find Me. 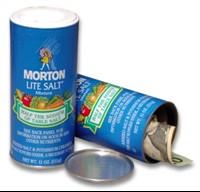 Anyone who has ever left for vacation has spent time considering where in their homes to hide their valuables. Well, chances are that a thief has spent even more time pondering where valuables are likely to be hid. All things considered, a safety deposit box in a bank vault is still the best place to keep jewelry and other valuables, but there are some places around your home that make terrific hiding places for important items.
There are some places where experienced thieves are sure to look, such as inside top drawers, underneath any drawer, and behind wall art in the den or bedroom. We suggest you take care to avoid these obvious, or rather popular, caches.
It's a good idea to wrap items in plastic before stashing them. Most of our suggestions are for small objects that can be held in your hand. Take time to look around your place for spaces where you can hide things unobtrusively. You want places that are easily overlooked and will not be disturbed accidentally by a houseguest or neighborhood pet.
The following suggestions are less obvious places than the ones mentioned above, but remember that a determined thief with enough time will probably find what you have in your home. What you're doing here is buying time, hoping that any burglar will be disturbed before getting to your good stuff.
Hide it Easily
Look for easily accessible places, created with a minimum of fuss, which are also easily overlooked by the casual observer. Some good examples of these places are:
Create a More Permanent Hiding Spot
These places require a bit more preparation to become effective hidden containers.
Posted by Ronald L Yahr, Jr at 5:00 PM No comments: 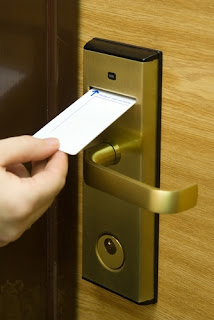 Before your trip
What to look for in a safe hotel:
When arriving and checking into your hotel room
Room Selection
Elevator safety
When checking into your hotel room
After checking into a room, examine the following:
Place that all-important flashlight next to your bed.
When you leave your hotel room for the day or evening
Hotel Safe Considerations Depending on the type and age of your hotel, typically safes which let you select your own combination are safer than room safes with keys that may have had keys copied by dishonest hotel employees.
What to take with you when leaving your hotel room
Laptop safety while staying in a in hotel room
Hotel parking lots
Posted by Ronald L Yahr, Jr at 5:00 PM No comments:

Thefts at Airport Screening Stations - Things to Look For 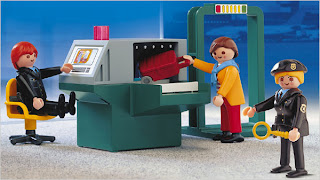 If You Travel Via Commercial Airlines and Carry a Laptop Computer Or Briefcase Containing Valuable Material... This is Vital Information to Know!

This scam involves two persons who look for a victim carrying a laptop computer or other valuable carry-on baggage and approaching a metal detector. They position themselves in front of the unsuspecting passenger and stall until their mark puts the laptop on the conveyor belt.

The first hustler moves through the metal detector easily. The second deliberately sets off the detector and begins a very slow process of emptying pockets, removing jewelry, etc. While this is happening, the first hustler picks up the laptop as soon as it appears on the conveyor belt, walks away quickly, heads into the gate area, and disappears among the crowd.

When the passenger finally gets through the metal detector, the laptop is gone and there's no way of proving the person who set off the detector with the delaying tactic had anything to do with the theft. In fact, a third hustler may sometimes be involved, as he takes a hand-off from the first. This third crook takes the computer out of the restricted area before anything can be done to stop the theft (even if the passenger becomes aware of it while still waiting on the other side of the metal detector).

What can you do to prevent it from happening to you?

Of course the obvious is when traveling with a laptop computer (or any 'hand carried' valuables which must be placed on the airport's security conveyor belt for examination by x-ray) is to try and avoid lines at the entrance of the metal detector.
Better yet... try to fly with a friend and make sure one of you has cleared the detector before either puts anything on the conveyor belt!

When you don't have a traveling companion and there are unavoidable lines, you must delay putting your luggage and laptop on the conveyor belt until you're sure you'll be the next person through the metal detector. And, as you move through the detector, keep your eyes on the conveyor belt and watch for your luggage and laptop to come through at the other end, while keeping a 'sharp eye' on what those in front of you are picking up).
Posted by Ronald L Yahr, Jr at 5:00 PM No comments:

Email ThisBlogThis!Share to TwitterShare to FacebookShare to Pinterest
Labels: laptop, Theft, Things to look for

Sit in bulkhead or exit row aisles. Bulkheads offer extra legroom and no one can recline his seat back into your face. Remember that you have to store your carry-on luggage in the overheads. Exit rows have the luxury of extra foot room, but you must be able to open the emergency door, if needed.

Dress for duress. Wear flat-soled, lace-up shoes so you can loosen them if your feet swell. Rubber soles my catch on the exit slide during an emergency, and dress shoes don't adjust for swelling.

Protect your bags. Checked bags can get lost. If you have to check, use curbside skycaps to avoid lugging heavy bags through the terminal. Always use luggage locks; some baggage handlers get over curious about what's in your bag.

Entertain yourself. Bring plenty of magazines; they're lighter than books and disposable. Don't forget your Walkman, either; it's the perfect way to catch up on those motivational tapes you've been meaning to listen to or to avoid unwelcome chatter from the person sitting next to you.

Fix your posture. Airline seats don't adjust for relaxed spinal posture. Support your lumbar spine with a rolled-up blanket and your head and neck with a pillow. Another pillow or blanket to prop up your feet will relieve pressure on the backs of your thighs.

Drink eight ounces of water every hour. Airplane air has only 1% to 10% humidity, even less than most deserts. You'll need more than the two small cart drinks offered on most flights. Bring your own bottled water, and avoid coffee, alcohol and carbonated drinks, which are dehydrating diuretics.

Eat light. Even if you order vegetarian meals, everything but fruit plates contains too much salt and fat. Bring your own healthy snacks, like dehydrated soups or nutrition bars. Don't overeat, since your internal organs naturally swell due to cabin pressure changes.

Use daylight to adjust to a new time zone. The Association of Flight Attendants said the secret is to follow the same wake-up, bedtime, work and meal hours in your new location as in your old time zone. Don't try to catch up on sleep by going to bed right after you land or trying to stay up just because you gained a few hours. You'll adjust more quickly if your follow the clock.
Posted by Ronald L Yahr, Jr at 5:00 PM No comments:

Email ThisBlogThis!Share to TwitterShare to FacebookShare to Pinterest
Labels: comfort, Tips for flight

Tips for first-time and infrequent traveler.

Before you leave home

Leaving and Arriving at the Airport1

Ask questions. Airline employees are generally friendly and helpful. No question is too simple. Just ask.
Posted by Ronald L Yahr, Jr at 5:00 PM No comments:

Promote Your Page Too

Ronald L Yahr, Jr
but they who wait for the LORD shall renew their strength; they shall mount up with wings like eagles; they shall run and not be weary; they shall walk and not faint.